This month marks the 25th anniversary of our website domain www.filters.co.uk.

In the scheme of things, and considering everything else that is going on in the world, it’s possibly not the most important thing you will read about today. But for us it is a major milestone and a good opportunity to celebrate and to reflect on the last two and a half decades and what we have achieved as a company and with our customers.

With that in mind, we invite you to join us in this celebration and maybe learn a little more about Croft Filters and our journey so far.

First, we need to go back to the origins of our company, which was founded in 1986 when a business partnership was formed between two brothers. Mark and Neil Burns had been on different paths up to this point, but these paths were to converge with a little bit a fate thrown in to the mix.

Going back even further, as an unemployed 18-year-old, Neil had turned up at the Warrington job centre in search of work. The options he was offered were positions at a cable manufacturer or a wire weaving company. With the priorities of an 18-year-old, he asked which one was nearest the bus stop, at which point the lady at the job centre informed him it was the wire weaving company. As it happened this was incorrect, but fate took a hand in setting the course for Croft Engineering Services, which the brothers set up when Mark came out of the RAF in 1986 with Neil’s experience in the wire mesh field a driving force.

With a rented unit on Taylor Business Park and investment in wire engineering machinery, Croft’s business started to grow across the wire mesh industry of Warrington. (As a quick aside: Warrington is famous as a wire town — so much so, the successful rugby league team is widely known as “The Wire.”) The early years were focused on building the business and our reputation across the sector, in that we did not even have a sign outside the door. However, we identified that directly developing our customer base (rather than dealing with middle men) would make the company more profitable. Thus, throughout the early 1990’s we focused heavily on new marketing activities. In those days trade directories were the main focus of B2B activity and it worked quite well for us.

However, as that decade progressed, we were also becoming aware of the emergence of the ‘worldwide web,’ or, the now ubiquitous internet. The digital revolution and its evolution into Industry 4.0 was on our radar early on, and we were lucky in that we had a friend — Bob — who was a stay-at-home dad at that time and was looking for flexible opportunities with this new emerging technology. We worked with him and as a result, in January 1997, Neil found himself travelling into Warrington to visit a company called U-net to register (what Bob had told him we needed) a domain name. 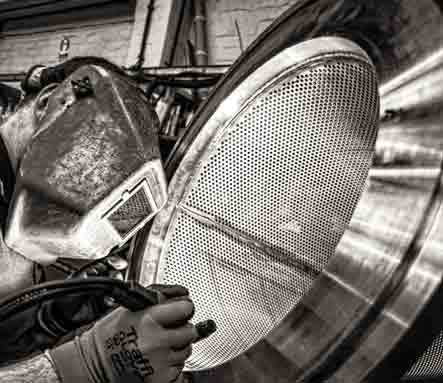 At the trade counter the person wanted to know what name we wanted to register. We decided that www(.)croftengineeringservices(.)com was way too long. The more generic “Croft” domains had been taken by the company who make fortified wines, so we came away fairly disappointed with the domain www.filters.co.uk.

It took us quite a while to realise just what we had.

But to begin with, Bob had what he needed to build our first website.
And so, today we are celebrating 25 years since our journey became digital. As it turned out, the website was just the start.

Our digital evolution has since become a much broader story with product design, additive manufacturing (AM) and other digital manufacturing technologies contributing to our growth and success over the last quarter of a century.

Industrial filters are our speciality and we have built a reputation as the UK’s leading manufacturer and supplier of custom filtration solutions by focusing on innovation and a customised approach. Croft offers custom filters based on various design types, including basket strainers; cone-, leaf-, pleated– and cone filters; as well as Y- and T- strainers and screen filters. As such, Croft Filters is a critical link in a number of industrial supply chains, with our solutions fulfilling demand in sectors such as green energy, food and beverage, pharmaceuticals, oil & gas, as well as many others.

As part of our celebration, we are delighted to share more than our story with our customers. We have 100 counting glasses that we are giving away. For our customers and readers that would like to claim one of these devices, they will be sent out on a first come, first served basis.

Croft can supply a wide range of custom filters from simple yet effective designs such as witches’ hats, screen filters and filter baskets, strainers and cylinders to complex, made for purpose designs.

Filtration in the Industrial Wastewater Industry

Having operated in the filtration market for over 30 years, Croft Filters has provided various filter designs to wastewater treatment plants.